A couple of locals in Marathon, FL told us about a yellow submarine deep in the mangroves of Boot Key. Dorothy and I had calm seas the other day, so we launched the tender and stocked up on some minor provisions. We mentioned our quest to a dock neighbor, Tom and Paula on “Life’sTraVails”, and they joined us in their tender. We traveled to the Atlantic side of Marathon Key and our search for the hidden entrance to the mangroves of Boot Key. After some searching along the shoreline we spotted some white PVC pipes stuck into the shallow waters. This was the indicator we were looking for. After traveling a little ways into the mangroves the channel opened up a little and there it was. The locally famous yellow submarine. 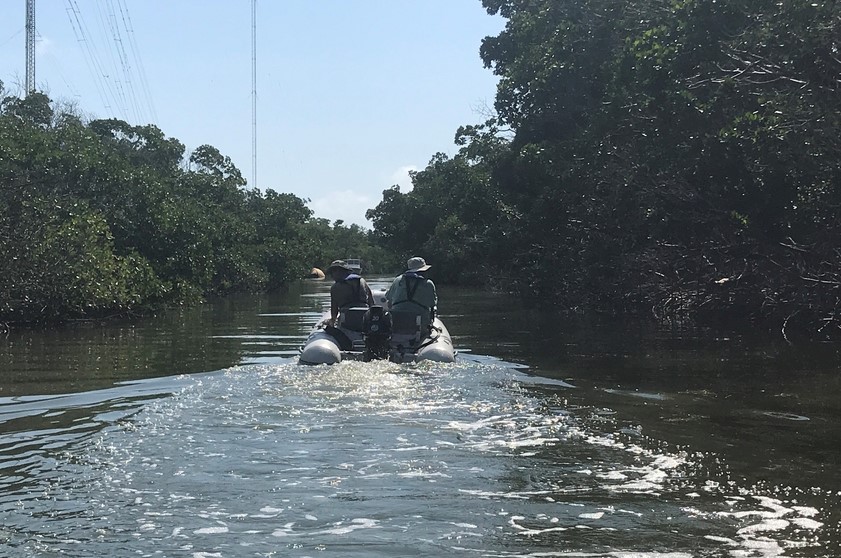 At first I though it was just a large fuel tank that someone had painted yellow. But one end was tapered to a point were a propeller would be located. Once we returned to SEASONS Dorothy did her research and found out its a true story. See below

BOOT KEY — No one lives in this yellow submarine, but Marathon resident Duane Shelton hopes that one day his homemade underwater vessel will be ready to explore depths of up to 1,500 feet.

Tucked away in the protected canals of Boot Key, the bright yellow submarine sticks out among the rustic fishing docks and mangrove forests on the mostly uninhabited island. The submarine’s color is not a tribute to the classic Beatles song; Shelton simply got a deal on some surplus paint.

An engineer for Sea Air Land Technologies in Marathon, Shelton is accustomed to creating products such as solar panels and wind generators.

But for 11 years, he has spent his free time working on an entirely different project: a 92-foot, 100-ton steel submarine.

Shelton said he is nearing the final stages of his project. Ask him when he first started thinking about submarines and you’ll get a response that dates back to his childhood.

“When I was a little kid, I used to fill my bathtub up to the top and use a hose to breathe under water,” Shelton said. “Since then I have always been thinking about submarines.”

On weekends when the weather is fair, Shelton rows across Boot Key channel on a homemade raft.

“I’ve made it across seven times and, God willing, hopefully today will be eight,” Shelton said before hopping on the raft.

Shelton has had to face a series of twists and turns in his journey to complete the submarine. Just getting the pressure vessel that would wind up being the hull was an adventure. The scrap yard in Chicago wanted more than $100,000 for the steel tube, but he talked them down to about $10,000.

“Then I had to figure out how to get it down here,” he said.

By train, truck and barge, it found its way to Shelton’s dock space on Boot Key. The physics major then found out it would cost at least $750,000 just to apply for the federal application needed to use it as a commercial and educational enterprise. He plans to take it to Honduras and operate dive and educational tours there.

Shelton’s sub will have no windows. Instead, he plans to mount cameras on the outside of the vessel and beam those images to flat-screen TVs inside the giant tube. The back of the sub will have a pressurized chamber to allow for deep-sea launching and retrieving of scuba divers.

This story is from 2008. I doubt you’ll find us signing for trip anytime soon or never. I think his dream is long past gone. Fun outing for us though.