The Peterborough Lift Lock on the Trent Severn Waterway is an engineering marvel.

Some info from Wikipedia;For many years, the lock’s dual lifts were the highest hydraulic boat lifts in the world, raising boats 65 ft. The lock has two identical bathtub-like ship caissons in which vessels ascend and descend. Both caissons are enclosed at each end by pivoting gates, and there are pivoting gates at the upper and lower reaches of the canal at the junctions with the caissons. The gates on the caissons fit into slots on the gates on the reaches, so that they open in unison.

Each caisson sits on a 7.5 ft diameter ram, the shafts for which are sunk into the ground, are filled with water, and are connected with a pipe that has a crossover control valve. The caissons are guided up and down on either side by rails affixed to concrete towers.

No external power is needed: the lift lock functions by gravity alone using the counterweight principle. One caisson always ascends and the other always descends during each locking cycle. When one caisson reaches the top position, it stops 12 inches below the water level of the upper reach, and the control valve is closed;[5] Siemens ultrasonic sensors are used to help determine the differential.[6] The upper reach and top caisson gates open, and water flows into the top caisson until the level equalizes. The weight of the extra foot of water is 144 short tons (131 t), making the total weight of the upper caisson 1,844 short tons (1,673 t).[5] Any vessels that just ascended in the top caisson exit into the upper reach, and any new vessels making a transit of the lock then enter the bottom or top caisson from the lower or upper reach respectively. Once the vessels are secured, all gates are closed and the crossover valve in the connecting pipe between the ram shafts is opened. Since the upper caisson weighs more than the lower caisson (1,844 vs 1,700 tons), it pushes down on its ram, forcing out water from its shaft via the connecting pipe into the shaft of the bottom caisson. The force pushes up on the bottom caisson’s ram, raising the caisson up to the top position. When the gate of the newly descended top caisson and lower reach gates open at the bottom, the extra foot of water flows out and equalizes with the water level in the lower reach of the canal, and any descended vessels exit, allowing the cycle to start over again.

I know this is a long explanation but I have a few engineer friends reading this blog.

We were fortune enough along with some other Loopers to receive a behind the scenes tour of the inner workings of the lock.

The Lockmaster let Dorothy operate the lock. When we are finished traveling by boat she can get a job at the lock.

Walking the edge of the tub. A 2′ wide catwalk with water on one side and a 65″ drop on the other. 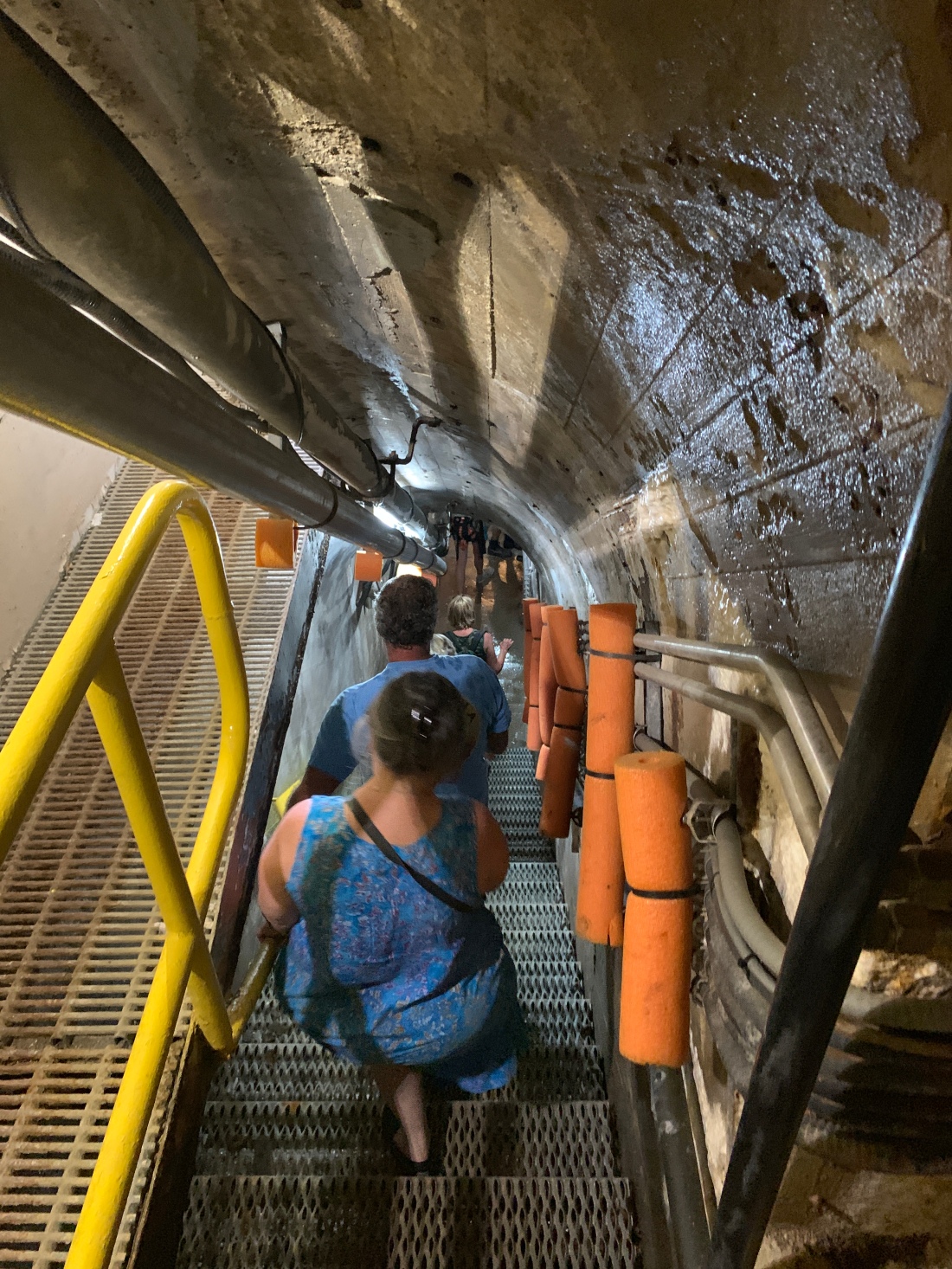 The lift rams are massive.

SEASONS in the Lift Lock tub.

Leaving the lock the canal becomes very narrow in sections. You are required to issue a securite’ call over the VHF radio to warn other boaters you are in the channel.

This experience at the Peterborough Lift Lock made the top 10 list for our Great Loop trip.

One thought on “A different kind of Lock”