Most everyone has been to New York City before or viewed pictures of the skyline. Nothing compares to seeing the city from the water. We turned the corner on the Atlantic Ocean to head into New York Harbor.  The intensity of sights and sounds steadily  increased as we approached. Excitement also increased because we were going to meet some more friends for a few days and I would get to see my son Greg.

We first stopped at Great Kills Yacht Club  on Staten Island. A great small volunteer run club. They are more than happy to have Looper’s stop in for a few days.  We needed a few provisions so we were sent to Frank and Sal’s Italian Market. There was a long line at the deli counter. You had better know what you want when your turn comes because they move right along. The deli guys were tough looking while talking in a mix of Italian and English. This little area of Staten Island was fantastic, Nolas’ Pizza, Laundry mat , Post Office and the bar at Great Kills YC exposed us to a slice of New York suburb life. I had the best hair cut of my life at Mike’s Barber Shop. The older Italian lady hardly talked at all and did not even ask me how I wanted my hair cut. She just went to work forcing my head in different directions to get the right angle for her scissors. A trim and clip here and there, and then she lathered on the hot shave cream and took a straight razor to my neck and sideburns. 20 minutes later and only $15.00 lighter in my wallet, I felt fantastic. Sorry, I did not even think to take a picture of the perfect lines around my ears and neck.

We spent a day on our own checking out Governors island and the views from the Empire State Building.

We moved on to Liberty Landing Marina across from Manhattan on the Hudson river. Our friends Dave and Lori were joining us for a few of days on SEASONS. On the way we slowed and took our time looking at the Statue of Liberty just soaking up the history of these waters. Photo taken by a Looper friend.

We spent a couple of days at Liberty Landing Marina. Our good friends Dave and Lori arrived as we tied our lines to the dock to spend a few days with us.  We traveled by ferry to the city. The highlights were the 911 Memorial, walking through Central Park and a walk on the High-line trail. We had a couple of beers at O’Hara’s Pub and thoughts of those who served and those who lost their lives.

Looking up from ground Zero at the 911 Memorial 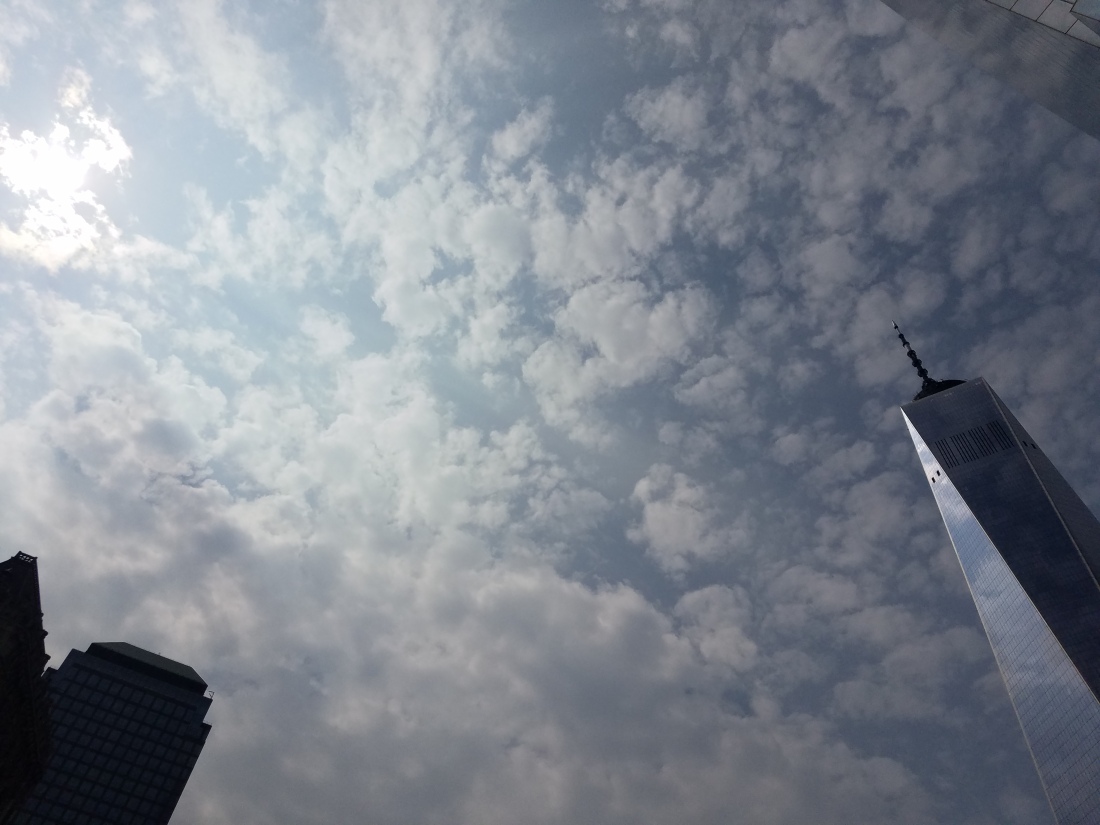 Times Square, They put Mickey Mouse driving a sailboat on the screen just for us!

The next day we left the dock bound for Long Island Sound and Oyster Bay. Another spin past the Statue of Liberty for our guests and then a fast ride up the East River. I didn’t know a 42′ Grand Banks could go 16.2 mph and here is the photo proof. We hit the current the correct way through Hell’s gate! 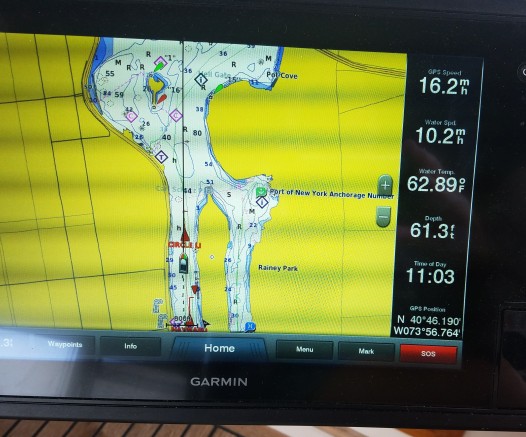