WOW, Add a visit to Cumberland Island to your bucket list.  The history, the scenery, the beach and the wildlife are all spectacular. Cumberland island is only accessible by boat. There is a commercial ferry bringing people to and from the island based in St Marys, GA. We anchored just off the inter-coastal waterway next to the island for 3 nights. A very peaceful setting with several other boats near us.

There are campsites run by the National Park Service, a few private homes, and a small very fancy hotel for places to stay. All sand roads with a few 4 wheel drive trucks and vans.

The first day we took our dingy over to the public dock and took a 5 mile walk to see some of the Dungeness ruins and look for the wild horses. Then we walked over to the beach. Not sure why I didn’t take any photos but it was very desolate and very little signs of human activity. the beach spans 18 miles the length of the island.

Dorothy almost stepped on this guy.

Wild horses roam the island freely and have for some 400 years. We saw complete equestrian life cycles, from new born foals nursing at their mother to those you wanted to put out of their misery. Our tour guide told us the National Park Service does not interfere in any way with these horses allowing them to live a wild and natural existence. The only thing they will do is move a deceased horse to a remote area of the island.

On the second day we spent $50.00 for a 6 hour guided historical tour of the island. It was worth every penny. Our tour guide, Mike, had worked various jobs connected with the island most of his adult life and he was a great story teller. A small group of 9 hopped in a van and down the sand main road we went. He would tell us of the life on the cotton plantations and how Mr. Stafford was one of the best owners in the south. Yes, he had slaves but he treated them as human beings. They had work quotas and when fished they could use their free time to garden, read, or take leisure time. No one worked on Sundays. His workers were allowed to sell their excess harvest to the nearby townspeople. He also required all of his workers to become educated in reading, writing and math. This was against the law at the time but Stafford was left alone on the island. He also taught his slaves how to save money they earned and invest it. After the Civil War was over the freed men bought farmland and homes with the money they had accumulated.

In the 1880’s the Carnegie’s came to the island. Our tour guide did a wonder job of  taking you back to what life was like for the Carnegie family when they owned 90% of the land. Lucy Carnegie built mansions for her children on the island  who were married. Plum Orchard is one of those Mansions which is beautifully preserved. 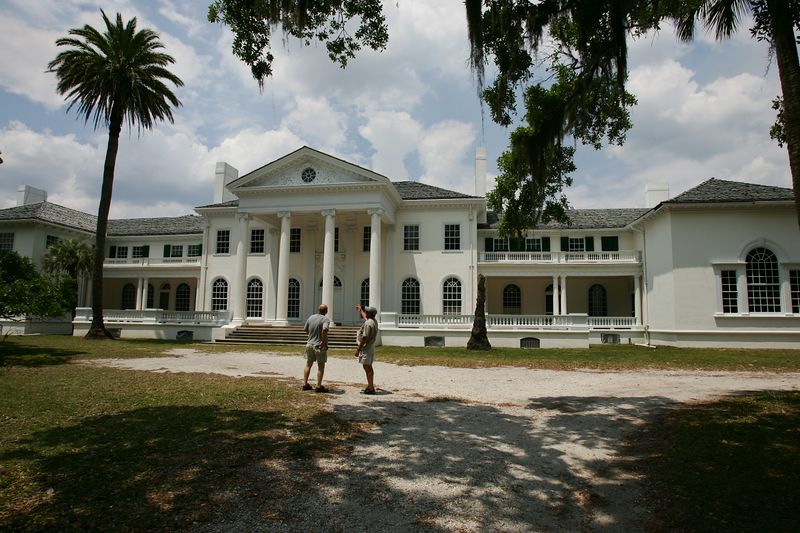 All original furniture, the desk is an early Stickley which is extremely valuable.

This is the little church where John F. Kennedy Jr. and Carolyn Bessette were married on Cumberland Island in 1996. He chose it because he didn’t want the media to ruin the day. None of the locals even knew what was going on till it happened.

Of course we had to do the typical tourist photo.

There is so much to write about our visit to Cumberland Island. I can not do it justice in a blog. There are books written about the life style and the history of the people.

Sunset from our anchorage